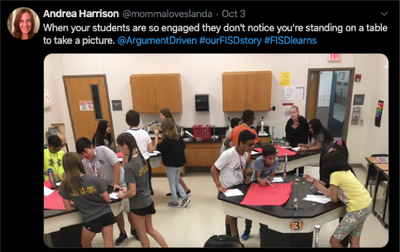 Our featured teacher for January 2020 is Andrea Harrison. Andrea is a 7th-grade teacher in Frisco ISD, and you can find lots of great pictures of her students doing ADI on Twitter at @mommaloveslanda!

Q: How and when did you learn about ADI?

I first started with ADI in 2014 in a chemistry class when it was being rolled out with my district in McKinney, Texas. Since then I moved to Frisco, Texas and have been doing ADI with my 7th-grade students for the past few years as well as helping to train other teachers in my district and support teachers as an instructional coach on my campus.

Q: What made you decide to seek training in ADI?

I tried an ADI lab before getting a lot of training while in my previous district toward the end of the school year. I discovered that students were frustrated by the ADI investigation, not because of the process but because they didn’t know the “answer” to the investigation. At that point, I realized that our “recipe” labs were reinforcing concepts for students who already knew the material but that students were not actually learning through the labs. I had a true “ah-ha” moment. When I changed districts and I heard they were looking at using ADI labs, I knew I needed to learn more about how to maximize the potential impact it could have on my students.

I love to see the growth honestly. At the beginning, there is some serious struggle for kids who haven’t ever really been challenged to think as a scientist, but at the end of the year I let the kids see their original posters from the first ADI and they compare them to the final ones. Even the students who don’t feel like they are “good at” science are impressed with what they can do. That paradigm shift is EVERYTHING.

Q: What positive shifts have you seen in your own practice and with kids?

As a teacher, I’ve been much more willing to let go and recognize that things take longer and sometimes kids struggle, but in the long run they’ll remember the investigation and what they discovered. Showing the kids what they need to know clearly hasn’t worked.... I’ve found myself starting to let things take longer almost daily now because the struggle is good. I’ve become a much better facilitator.

By the end of the year, they’re much more comfortable trying to figure things out on their own. I’m really starting to internalize the idea that if they’ve just learned how to figure things out and problem-solve, skills they’ll need to have as an adult, I’ve done my job, regardless of the content they come away with. If you think about it, they can look up any facts they need to know, but learning how to think through a problem is the real goal of science.

Q: What is your favorite ADI investigation?

My favorite one has to be the Food Web (Lab 11: Food Webs and Ecosystems) lab. Students automatically make assumptions about what they want to get rid of, but then once they start looking at the facts and having discussions about future impact, balancing predator and prey, resources, etc. there are some fascinating discussions and I think they forget I’m even there! It’s almost like they aren’t even in the classroom anymore and their own community is being affected. We do it at about the middle of the year, so students have a good grasp of expectations and I can start to see a real shift in their thinking!

Q: What did you find challenging when using ADI at first and how were you able to overcome that challenge?

Because of the way my district is rolling out ADI, I’ve had students in their first year of doing ADI for 3 years in a row. Next year will be the first year that my students will be coming in with some ADI experience because we’re starting to build a program, so I’m excited about that. The most challenging part of doing ADI has been getting students to a place where they can discriminate between evidence and justification. We’re working closely with other departments to make sure we’re using similar terminology in all core content to reinforce what they’re learning in other classes and it’s really helping.

Q: What advice do you have for other teachers as they are starting out?

Do all of the labs yourself before you try it with your kids. Also, try to find another teacher who can do labs at the same time as you so that you can talk about it.

One strategy that’s been working well for us is to have the kids look at the task first, then go back and read the background information so that they can read more purposefully.